A woman named Caitlyn Radel-Paaby knew right away upon meeting Willow that she was a good dog. Aside from being a good dog, Caitlyn revealed that her now 10-month-old Great Pyrenees is also a great cuddler despite being from a breed that a lot of people see negatively for being aggressive.

Caitlyn believes that Willow would do everything to protect them since, when she is not playing, she constantly watches over everyone. She proved this right when the dog unexpectedly presented them with some evidence.

Caitlyn recalls completing her Thanksgiving Eve grocery shopping. When she returned home, she found her partner caring for their infant but Willow was nowhere to be found. Willow was always attentive when it came to Caitlyn, and she never failed to greet her upon her return home. The woman sensed something was off.

Caitlyn began searching for Willow immediately and found her behind the desk in their office. Willow approached her and motioned for her to follow her to the electric outlet.

Caitlyn was perplexed by Willow’s refusal to follow her out of the room, as her dog always follows her like a shadow. She called Willow again, but the dog continued to bark and refused to come out.

The woman remembered that Willow was so frantic to grab her attention and was pointing her towards the direction of the power socket. Caitlyn was confused because she did not know what Willow was upset over, but upon touching the wall, she discovered that it was warm.

It turns out that Willow had detected a fire from the electrical outlet before the actual fire broke out. Caitlyn and her family called the fire department immediately, and the team instantly came over and stopped the igniting sparks. She was informed by the fire department that their home would have burned to the ground if Willow had not alerted them.

The woman is very proud of her dog for rescuing their home and their lives. 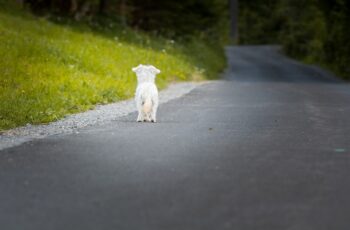