There are plenty of ways to help shelter dogs and the rescue group that looks after the pups. Sometimes people donate or raise funds for the operating expenses. However, we all know that not everyone has the wiggle room to do this. But it doesn’t mean that we can’t do anything to help at all.

It may come as a surprise to many, but a lot of those who help dog shelters do it without spending a single dime. All it takes is a person’s willingness to help, and sometimes, a little bit of brilliance. Just like this cross country coach who thought of an event that benefits both his runners and the shelter dogs from his county. Coach Luis Escobar decided to launch a “Shelter Dog Run.” Basically, the cross country team that he coaches from St. Joseph High School will be paired with the shelter dogs from Santa Barbara Animal Shelter. Coach Luis thought of it as an excellent way to get his team to do community service while training.

Also, the dogs will be getting valuable socialization training that is ever so important for shelter pups to get adopted. Not only that, but they will also get to play outside the shelter, which is surely a welcome change of scenery from their perspective. Imagine being inside the shelter for weeks on end. But the ultimate benefit that Coach Luis is aiming for is for the dogs to get adopted. Although the event is not a guaranteed way to get these pups a forever home but the exposure to the public can certainly help. After the first event was held, they already had an adoption.

Fred, the shelter pup, didn’t have the energy to finish the run, but his cuteness and loving character were enough for his human partner to adopt him. Later that week, the high school runner and his mom went to the shelter to officially adopt Fred. After their video went viral, coaches from across the country reached out to Coach Luis, thanking him for the idea and asking for permission and advice on how to hold their own “shelter dog run” event.

Got a pretty cool cross country team (& coach!). Taking dogs from the animal shelter on a Morning Jog! If you see a dog you like, go adopt! 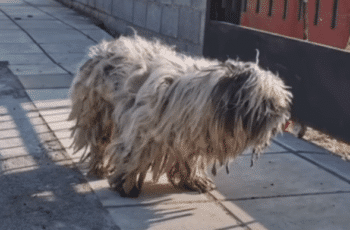