Northeast Animal Rescue, a regional rescue based in China, has been very active in rescuing dogs from various locations and situations. A puppy that had been dumped and abandoned in the trash was one of their heartbreaking rescues. Fortunately, he wasn’t buried too deeply yet, and they were able to save him and give him a second chance at life.

He was shaking so badly when they found him because he was wet and cold. He continued to growl, and when the rescuer picked him up, he was so small that he fit in her hand. And he just seemed delighted to see that someone was looking after him.

The rescuers named Panda because he stood out from the other abandoned dogs. Usually, dogs that have been subjected to adversity, such as Panda, go into survival mode, becoming either timid or aggressive. Panda, on the other hand, remained a sweet little puppy with a strong will to live.

Panda was immediately fed milk after he was moved to a safer location. After finishing the milk, he lay down on a warm blanket for a few minutes to relax. After that, he took a nice bath and was just calm and relaxed the entire time.

Panda was able to recover after some time fully. He grew from a trembling puppy to a very energetic chubby little bean with a lot of life in him thanks to the extra helpings of milk. He now enjoys playing a lot, running around, and having a good time. Panda has also developed a thick and healthy coat of hair.

He was abandoned in the trash to die alone and in the cold, but now he has a warm and loving home with a family who adores him. Panda is, without a doubt living his best and most full life. 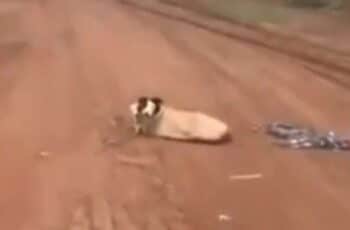