Most people believe that dogs and cats cannot coexist. This is not entirely correct. How a dog reacts to cats is determined by how well its owners socialize and expose it to different animals.

Cheeky, a puppy, stunned her human mother by doing something very touching for a stray cat. Cheeky is an elderly dog who adores caring for tiny creatures. So Cheeky would always be pleased when her mother brought home kittens to foster.

She would act as an adoptive parent for the kittens, making them feel safe and secure. Cheeky’s mother has always considered adopting one of the kittens she fosters, but she has never had the opportunity because they are all adopted. Everything changed one day, however, when a stray cat began visiting their home because of the food they laid out on the porch.

The stray cat welcomed the food outside Cheeky’s house, but she was wary of humans. She avoided human contact as if her life depended on it. The stray cat, however, decided to stay because of the free food provided outside by Cheeky’s parents.

The cat quickly decided to scale the fence and enter the backyard. She was taken aback when she noticed a dog on the opposite side. Cheeky ended up scratching her nose. While most of us would anticipate Cheeky becoming enraged and chasing the stray cat away, Cheeky did precisely the opposite. She was adamant about making friends with the lost cat.

It took some time for the stray cat to warm up to Cheeky, but after getting used to her presence, she understood she had nothing to fear. Cheeky’s parents were astonished to discover Cheeky, and the stray cat was cuddling on their porch.

They adopted the stray cat and named her Sushi after Cheeky made a buddy. After that, Cheeky and Sushi grew close. Sushi followed Cheeky everywhere she went. Here is a video about Cheeky and Sushi’s bond and how they became best buddies. 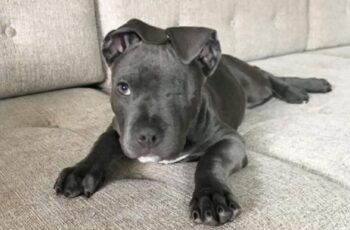