Some elderly people can maintain a middle-aged appearance effortlessly. Who would have imagined that there are dogs who can also appear the same way?

The following story is about Jeremy, a senior dog, and his amazing appearance.

Most senior dogs develop physical features that show their age. Some have eyes that turn grey and fur color that looks faded. None of these can be seen on Jeremy, so anyone who doesn’t know him would assume that he’s not old.

Jeremy was born in an animal shelter in Colorado, USA. A Korean woman took an interest in him and adopted him. Eventually, that woman moved back to Korea in 2015 to work as a language teacher, thus taking Jeremy with her.

Jeremy used to have two best friends with who he hung out most of the time. Unfortunately, they passed away since they were also senior dogs. Ever since he lost them, he became less active and preferred to sit around at home.

The owner knew that she couldn’t leave Jeremy alone because he would feel extremely lonely. That’s why she brings him to work every day. Fortunately, he has adjusted to it very well and never made trouble inside the school. The students also love seeing him inside the classroom.

Even if Jeremy is no longer physically active like in his younger days, he can still do a few tricks. For example, he always approaches when called. Furthermore, he can stand on his hind legs while giving his owner a quick hug. It’s not the most athletic activity, but it’s still impressive for a dog his age.

The owner does everything she can to keep Jeremy happy while he’s still alive. His food is always high quality, and he always receives praises. Perhaps his youthful appearance is a result of the owner’s love and care. 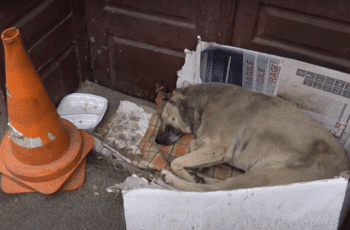