Recently, a fur mom named Jean Mosher and her rescue dog, Jaqweenie, were at the dog park when the latter had a dramatic performance. Jaqweenie was playing with another dog when he suddenly stopped and sat down. He was frozen in place and was even trembling.

Mosher noticed the pooch sitting all alone at a distance away, and she immediately knew there was something wrong. She went over to him and saw that Jaqweenie was shaking and curling his foot up.

Bystanders started gathering around Jaqweenie, concerned that he was probably injured.

Mosher assumed it was a severe injury because the pooch had experienced terrible pain before, so she thought he had a high pain tolerance.

The fur mom met Jaqweenie three years prior at a shelter and immediately fell in love with him.

Jaqweenie has a large overbite, giving him a sassy expression. As a young dog, he had some of his teeth removed because of his misaligned jaw. He recovered after his surgeries like a champion, so his fur mom assumed his paw must be in terrible condition for him to have such a reaction.

Mosher contacted a vet, who then rushed to the scene. The vet examined Jaqweenie’s paw thoroughly and found a tiny cut that didn’t even bleed and was the size of a papercut.

No bandage was required, but the fur mom asked the vet to wrap the dog’s foot nonetheless to make him feel better.

For the rest of that day, the rescue dog kept up his act — limping around and demanding cuddles. Jaqweenie had the bandage for 24 hours and took it off himself the following night, walking just fine.

Jaqweenie likes that his mom treats him like a baby. But now, his fur mom knows how far he can go to get her attention. 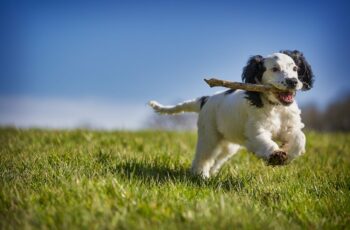