Couple Sierra and Jayden were traveling across the Utah desert when they spotted Birdie, a stray dog, running across the interstate. The dog was barely avoiding traffic and was in grave danger, so the young couple did an immediate U-turn and went back to check on her.

Recognizing that the dog may have just gotten lost, the pair started to search for the dog’s home and eventually found it. Unfortunately, her owners said that they no longer want her, so they gave her to Sierra and Jayden.

The couple wished they could adopt her, but their apartment did not them to keep dogs. In the end, they were compelled to contact one of their friends, who recommended a woman named Brianna Madia.

When Brianna first learned about Birdie, she was apprehensive to adopt her. She had two older dogs at home and was unsure how they would react to the addition of a lively doggo. But Brianna found that she could not refuse the cute animal, so she offered to foster Birdie until a permanent home could be found.

However, the rambunctious dog became a foster fail soon enough. Several weeks after bringing Birdie home, Brianna made the decision to make the dog a permanent member of her family. After seeing how well she got along with her two dogs, she realized she could not separate her from them.

Additionally, the dog appeared to like her mother’s nomadic lifestyle, since they frequently spend months living and traveling in a van.

Birdie’s story began with her owners abandoning her, but she now lives a life filled with adventure and love.

Scared puppy found in the desert gets foster siblings who are total adventure dogs — and wants to do everything they do ❤️️ pic.twitter.com/MRnpzf801U 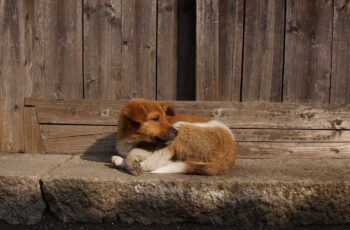